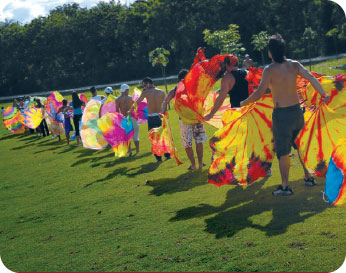 Flagging around the world: Brasil

The more recent origin of flagging in Brazil can be traced to the city of Belo Horizonte (Portuguese for “Beautiful Horizon”) in the Brazilian state of Minas Gerais, beginning the late 1990s. Flagging moved from the parties in Belo Horizonte to Rio de Janeiro and then later to São Paulo, Brasilia and Florianópolis.

At first, flagging was imported directly from the American parties. Later, as it has become more popular, flaggers have incorporated local cultural elements in their designs and flags including drawing inspiration from local painters and artisans.

The gay scene has grown in cities like Rio de Janeiro and São Paulo, flagging has also seen an increase in popularity and spaces where flaggers are welcome The tribe is growing, and some online flagging communities have over 800 members.

Flaggers can be found throughout the electronic music scene in Brazil. Men, women, gay and straight, there are hundreds of practitioners. As the movement grows, not everyone observes the cultural richness. With events like flagging in the park (shown here), Flag-Masters are teaching not only movement and flag making but also the essence and rituals of the
art form.

Andre Duarte is a 31-year-old electronics technician, student of social communication, and flag-master since 1999. www.andreflagger.com

Photos: The first Flagging in the Park in Belo Horizonte,
January 20, 2008. Photos courtesy of Augusto Hippert>

Flagger Master and flagmaker in Brazil since 1999. Actually producing the Flagging in the Park with the city hall and Culture Fundation in Belo Horizonte, city in the State of Minas Gerais. I love yelows in my sets, or anything that can became a flame.