Cheater
A loop of cord added to the mainstay of a fan, or at the handle of a flag, which allows the fan or flag to be spun freely without damaging the flow tool.
Depth of Glow
Refers to the dimensionality of a flag’s design. Large areas of the same color can appear flat. Dying a set of silk flags with blends and layers of color makes them appears 3-dimensional, giving good “depth of glow”. 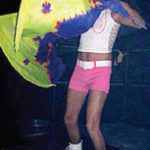 PoiboyThose oh-so-cute poi-spinning boys who have never picked up a set of flags but spin them like naturals. Cute and filled with infectious enthusiasm, and apparently unaware of all the oh-so-gay attention they are getting.RoperSomeone who spins a pair of flags into twisted ropes – one of the most destructive things you can do to flags. Ropers never seem to have their own flags, and always want to borrow yours.Wall SetAn beautiful set of flags that are absolutely awful in motion. Usually the result of a very complicated dye pattern, a wall set looks best… on a wall.WashabeeShort for “Martha Wash Wannabe”, a nonflagger diva who takes the center of a space and refuses all requests to share. Because, of course, flaggers are there to provide a backdrop for his impromptu show.