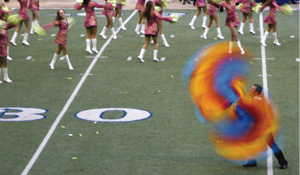 SWIRL, GURL: Bryan and his troupe of flag dancers brightened up the Thanksgiving Day game at Texas Stadium. (Photo by Jim Robert)

Eight gay men added a dazzling splash of color to the Dallas Cowboy’s Thanksgiving Day halftime show last week. In front of 65,000 football fans along with an estimated 66 million television viewers, Dallas’ flag-dancing king, Phillip Bryan, led his troupe in a polished routine that complimented Sheryl Crowe’s version of “If It Makes You Happy.”

During the televised shows, the cameras cut between shots of Texas Stadium bathed in fireworks, the Cowboy Cheerleaders shaking their pompoms and enormous tie-dyed silk flags that gorgeously swirled in figure-eight-like movements through the air.

Bryan landed the gig about a month ago when halftime organizer Stephen Dahlem was hoping to add something new to the festivities, which kicks off the Salvation Army’s Red Kettle Campaign, a 115-year old tradition.

To prepare for the flagging gig, Bryan designed 24 pairs of flags and new flag-team outfits to match other elements in the show. Because the performance was on a holiday, rounding up a crew was a slight challenge. Four Dallasites performed: Steve Reedy, Patric Nast, Damian Martinez and Bryan. He also recruited Jon Ericson from Fort Lauderdale, Ben Zimmerman and Pedro Diaz from Tampa, Fla., and Christopher Fish from Denver.

If you missed the live broadcast, you can check out a clip on Bryan’s Web site: www.flaggercentral.com.