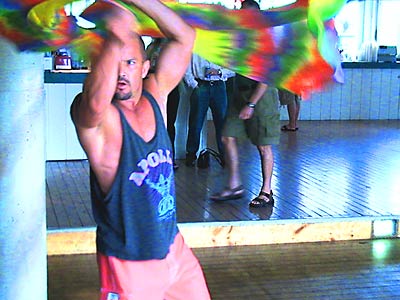 A Question of Community

This past weekend, April 2, 2005, I held a flag making workshop in my tiny NYC apartment for 12 people. I had taken doors off of their hinges to make tables, pulled up rugs, and moved artwork and vases to accommodate the crowd. I had also decided that I would cook for the workshop and had prepared a meal earlier that day. The workshop began at 2pm and the last three people walked out at 9:30 or so. Everyone had sewn a set of dyed silk flags.

During the planning phases, I wanted a workshop to be more than just a place to allow creativity to blossom and I wanted it to be more than an instructional workshop. My real motive was to bring flaggers together in a way that is not often seen here in New York.

Too often, (and it is not a judgment) what we call a community is defined by who we air kiss hello at the clubs before doing our thing on the floor or stage. We do share a common thread, we flag or fan. But is that a community?

While cooking for the workshop, I realized something: Never in my sober life (1987) had I invited a group of people over for food or socializing. Once I had stopped drinking, I had lost the “courage” to be a part of a group. One of my biggest issues has always been not feeling a part of any group- regardless if that group thought I was a part of them. Drinking had just numbed that painful awareness. Work, friends, military service, the wrestling community, and even the flagging community, were groups that I was very uncomfortable being a part of. I felt like an outsider, even when I was accepted.

Given my current situation, of being an organizer and promoter for the NYC flag and fan community, this could seem a bit odd. I started flagging in a class taught by George Jagatic, and while I felt comfortable, I never felt a “part of.” After a couple of years, I stopped going and made the excuse that I didn’t like all of the choreography in his class. The truth was, in that group of dancers, I felt like a total outsider.

A couple of years passed and I continued to flag outside of that group. Eventually I found my way back into George’s classes and made a determined effort to learn dance, choreography, and movement. I was welcomed back in a way that was very caring and very supportive. I really stretched my boundaries and committed to learning the choreography needed for a production in the Brooklyn Pride. Pride day was magical as I finally found a group that I truly belonged to, a community that I was a part of.

A friend from my workshop wrote to say “We only get to create a community and to be a community when someone brings us together.” These words are so true. I will go one step further and assert that community also means doing something together and not simply at the same time. There is a big difference between those definitions.

George had brought together a group and this community was extending an invitation for me to join. The invitation didn’t come verbally; the invitation came from within me. It had been there all along, I was just never ready to see it. The problem had never been the dancers or George. The problem was me- the same people were still there, I was just seeing them differently.

Now I have come full circle. I am now in a position of helping others to see that they are welcomed into our community. While others may have a different opinion, mine is that there is room for everyone in this community. During my workshop, it was apparent that indeed we are very diverse bunch. Some people wadded their silk up and applied color, others painstakingly ironed in creases. Some people wadded their completed flags up and threw them into a bag; still others rolled their flags up like prayer shawls. Some people ate everything prepared and others were pickier or had dietary restrictions. Some were very shy and others were very outgoing. But, everyone was shown respect and acceptance. (JM and MN observations)

This workshop was to be my way of introducing myself into the community, to bringing a part of the community together and to illustrate the diversity and range of personalities within our culture. I just happened to reap the benefits of understanding how I had grown and of accepting a new self-image. I was no longer that stranger looking in, I was doing something. Vision alone is a waste; vision requires action to be fruitful.