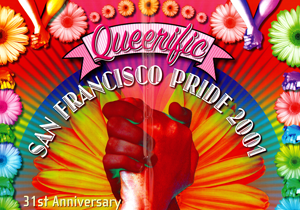 It’s here. It’s queer. And for those who wave those weighted sheets, flagging is a very spiritual thing. John Polly reports on a club phenomenon that’s breaking out into the light of day…

You’ve seen them. Standing on the edge of the stage, or atop a platform or a box at a circuit party, or at a club or on a “Sea Tea” circling Manhattan. Commanding your attention, yet they’re oblivious to it, defiant of it, dousing themselves as they do in spotlights or laser beams or a rainbow of flashes. They might be painted madly; sparkling, glittering, luminescent. Chances are, they’re buff, in tight shorts, usually shirtless, working themselves into a fluid, otherworldly frenzy of movement, music and rhythm.

And then there are the flags: swirling, whirling; looping; swooping; gliding and riding the music. They shine, they glimmer, they soar and cut the air and the frenzied atmosphere with alternate ferocity and silken grace. Their owners, the bodies attached to these brazen billowing blurs of motion and light, are caught up in a world (whirled?) of their own divinity.

They’ve always been here in one form or another, since the ’70s at least. In classic, long-gone nightspots like New York’s Flamingo and the Anvil and San Francisco’s Trocadero, some waved flags, others waved fans. They survived defiantly through the era of AIDS, though many of the greats were lost. And now finally, after all these years, they’re going stronger than ever. Flag dancers aren’t just trippy set decoration or queeny sideshows. As often as not, they are the show. And the dancers aren’t just aging, leftover club kids that time forgot. They’re young. They’re sexy. And they want you to know it’s not just about drama. It’s not just about the show or the drugs or the out-and-out showgirl-fabulousness of it all. It’s spiritual. And it’s art.

“I don’t do this for attention,” says Sam Lipton, a 33-year-old New Jersey boy who spends weekends tending bar at New York’s sexy leather bar, The Lure. “It’s not so much a performance as a way for me to work out my emotional stuff.” Fine. So how does a nice boy living in Englewood get into this stuff anyway? “The first person I saw flagging was my boyfriend, Phillip, the first moment I ever saw him,” says Lipton. “It was four years ago at the Pavilion in the Pines on Fire Island. It was a magical moment, but it wasn’t until I had the flags in my hands and I began moving that I understood what all the fuss was about. I felt immediately that they were a natural extension of who I am. I felt like I had been born with them in my hands.” Lipton, who’s also been dancing professionally since he was 12, isn’t alone in this feeling. Talk to flag-dancers – serious flagger types – and chances are they’ll profess an instant feeling of serendipity, a rightness of sorts, when they picked up flags. Talk to them for more than five minutes and the conversation veers not into the realm of “Well, I’m just a fierce drama diva, and I love to make a mad spectacle of myself,” but more towards the spiritual, the emotional, the inwardly healing feeling they get from flag dancing. Says Lipton: “When it’s just me and flags, it’s very, very personal.”

Michael Sigmann, a 40-year-old San Franciscan who creates and leads spiritual awareness workshops, first observed the wonders of flagging 11 years ago at the Red Party in Columbus, Ohio. “I saw this guy on a platform with a tight body and shiny flags and was just captivated,” recalls Sigmann. He went home and started swirling himself. Within a year, he and some pals were already being approached to perform at parties, flags and all. “At the beginning, when I really felt the first move come in, when I got it, it was like being possessed,” Sigmann confesses. “I became obsessed. At work, I would close myself up in my office at lunch, shut the door, get out my flags, put on some music and dance for an entire hour.”

Now, even a decade later and after leading his own group of flaggers (called Centrifugal Force) who perform at events and teach classes, Sigmann is in awe of this evolving art form and it’s power.

“It’s a means of transcendence,” he explains. “You get an awesome feeling from within. Flagging is a form of meditation, a celebration of finding yourself. It is a spiritual practice, and for us as gay men, it’s a way of expressing that we have survived the sufferings of AIDS and we are alive.”

George Jagatic, a New York flagger, likes to put it in more earthly, though no less enthusiastic and respectful terms. “Flagging is making the audible visible,” he says. “The music is playing, and it’s like you’re showing everyone, ‘This is what I’m hearing!’ If you can accentuate and express that, it makes the experience more powerful for everyone.” Jagatic smiles exuberantly; he’s excited about the endless possibilities of flagging, and he has good reason to be. He helped found Axis Danz, a flag-dancing troupe. Since its incarnation a few years ago, the dancers have performed at major circuit events (including this year’s White Party in New York), corporate-sponsored galas for MTV, and they have been featured in magazine articles and TV news stories. He hopes to further encourage flagging, which he calls “an entirely gay art form, of which we can be proud.” To that end, Jagatic teaches weekly classes for those interested in flag dancing; people who can begin to appreciate what they and their bodies can do. “There’s no limit to where this can go,” he boasts.

In San Francisco, Sigmann feels equally optimistic. “Flagging is a way for us to confirm the notion that there is a place for gays in this world,” he says. “This is our gift to the world, we can teach people through it. It’s all about restoring balance between the thoughts inside you and the world around you, combining color and light and sound. It’s using your own yin and yang, both sides of your body.”

Standing on a box half-naked, shaking your ass and waving satin, ultra-bright flags has its perks, carnal as well as spiritual. “It definitely attracts people,” laughs Lipton. “Your physical aspects are magnified by the flags; they enlarge the sense of the body. I can experience this incredible epiphany in one song, then it can shift to an erotic masturbatory experience. Flagging can be the most sensual expression of the divine slut!” Sigmann, taking a less loin-centered stance, concurs, if demurely: “Sure, it may draw you to someone, but what’s most attractive about flagging isn’t just the sex. It’s the energy.”

But what about the drugs? For many some of these transcendent moments and “energy” don’t come without chemical assistance. But it’s not about that, insists Lipton. “I’ve flagged completely sober, and it’s still thrilling,” he declares. “The endorphins are amazing!”

Talk to flaggers, and what you’ll hear is their affection for their friends who flag – their “flag families.” It’s a community that is growing as more flag-friendly clubs are popping up all over the United States. “In San Francisco we already have groups of 100 or more men gathering for “Flagging in the Park” events, says Sigmann.

It’s social, it’s sexy, and maybe sometimes it is just a big, mad, sassy show. But still what flaggers stress time and time again is the transcendent feeling and spiritual gratification they derive from their art. “When you flag, feelings begin to emerge, and you break through a wall,” explains Sigmann. Trying to articulate the abstract. “Your pulse quickens, taking you to a place where you can have no destination, no agenda but to enjoy yourself,” says Sigmann. For Lipton, the sensation is similar, if perhaps just a bit more personal, more immediate: “I feel lucky to be able to do it. It’s the most uplifting, inspired feeling – like I’m talking to God, talking to angels.”