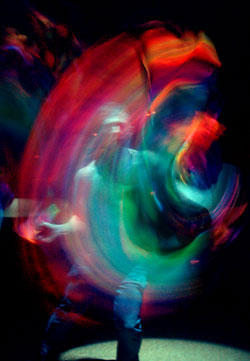 Some friends have asked what I meant by the term “Deep Flagging”.

It’s one of those terms I use to describe a particular state of “being”. For me, it represents a certain emotional, physical, and mental connection. The connection is with the music and with the flags, but it’s also with myself, and with the world around me. The thing is that this connection doesn’t represent a higher state of awareness for me, but a different one.

A few years ago I rediscovered my essence as a flagger.  It was a deeply emotional experience, and I sent a letter to a friend trying to put the feelings into words.  The letter does a decent job of putting this nonverbal awareness into words, so here it is:

I wanted to talk to you about a flagging experience I had recently, but was having trouble putting things into words. It was very enriching for me, and I wanted to convey how strongly I felt it.

Two weeks ago, I was in my Monday nightclub, and the DJ was spinning deep, rich trance with a lot of positive energy.

Mondays are my play nights, with a smaller crowd that’s there because they want to be, not because it’s the weekend and they “have” to go out. So I can go deeper without the need to interact with the patrons as much. 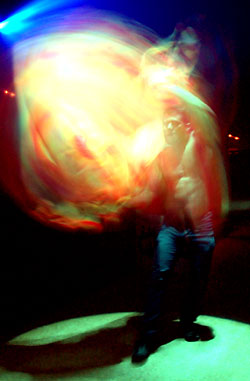 I had been playing with some of the moves you showed me when we met, getting comfortable with the technique, and coming up with additional moves derived from them.

But I wasn’t as comfortable with the movement. Again, it’s hard to put into words. It’s like how some people flag slowly, but with a movement that is graceful and hypnotic. Others could go much faster and be impressive, but be nowhere near as beautiful. 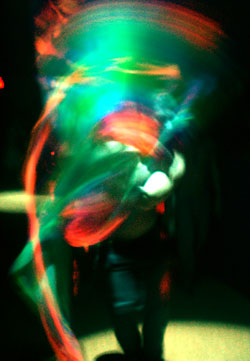 Something happened with the energy of the crowd, the music, the DJ, and myself, and I felt myself drop deep into mode. Suddenly the motions became fluid, and the silk was much more a part of me.

At even medium-deep levels of flagging, I feel the music as a sensate force that implies (but doesn’t direct) style and motion. In this case, music, motion, timing and style were all one, and everything was right.

That night, I came into a new feeling, and I loved it. 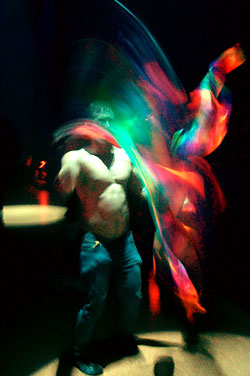 Later, I realized that some of the things that felt so right I had seen you and Mike do…not stuff you showed me, but things you did.

Doing it myself felt familiar, like recognizing something you’d seen before but not consciously noticed.

So I had a great night, not taking a break for the four hours I was there because I wanted to stay in mode and “play with all my new toys”.

The DJ told me it was the best compliment anyone had ever given him, and many of the patrons raved over the new “look” of my flagging style, but I was just happy about the new place inside myself that I had found.

Oh yeah, and all this happened while I was completely sober. 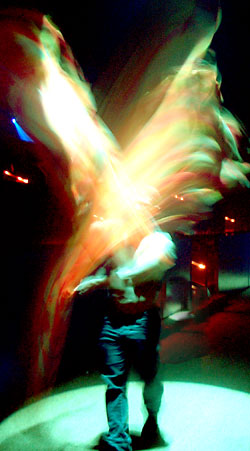 Since then, I had been trying to get back to the same place, but for awhile I was having trouble calling back anything but the new techniques. I could do the moves, but the feelings eluded me and I was feeling a little frustrated.

Then last night I stopped into the club. I had planned on taking the night off after all the festivities of Pride weekend, but I figured an hour on stage might be a good way to wind down after all the excitement.

I wound up staying all night and finding that place again.

And this time I could “step outside” and see what was going on. For example, I could identify the different timings for certain motions, as well as transition among the timings.

Another nice benefit was that I could see the areas that are weak, and then play with them some more. 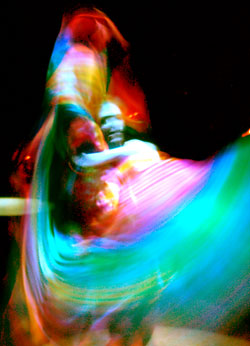 I know, “fun” is relative…I think calculus is fun.

So now I find myself really looking forward to my next night. The movements automatically play in my head now, so I think I’ll be able to call them back went I want to.

OK, this letter turned out a lot longer than I expected, so I apologize if you fell asleep while reading it and hit your cute little forehead on the keyboard.